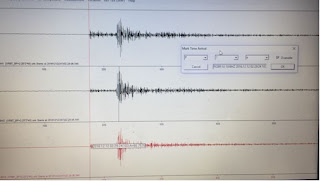 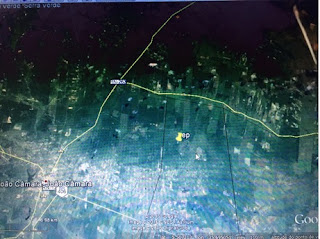 Título: Bayesian Inversion of Receiver Functions and Surface Wave Dispersion Data from the Northeast of Brazil.

We present crustal shear wave velocity models beneath 43 stations in the Northeast region of Brazil, using a method of Bayesian joint inversion for receiver functions and surface wave dispersion data. Our approach can be divided into two major steps combining the estimation of the model parametrization by a trans-dimensional optimization procedure and once it has defined the number of layers of the model, a Bayesian sampling is performed for the uncertainty estimation in a fixed dimension. Ideally, in a fully Trans-dimensional Bayesian inversion, the level of data determines the complexity of the model constraining the optimum number of unknowns (model parameters) as well as the different levels of uncertainty brought by different data types. However, it’s important to consider that this kind of approach demands an extremely high cost of computational efficiency. We avoid some of the computational burden involved in such procedure by selecting an optimum model parametrization by the use of a trans-dimensional algorithm of optimization, and then the sampling for the uncertainty estimation is carried out with the settled parametrization. Data errors are inferred by a combination of empirical and hierarchical approaches. The inversion is performed to observed data from the Borborema Province region (NE of Brazil), which consists of a complex tectonic framework characterized by different geological domains. Rayleigh wave group velocity dispersion curves and receiver functions are jointly inverted to investigate the Moho depth in the area, making use of a different methodology from what have been used so far for that region. The results presented in this work are coherent to previous published results that states the crust in the Borborema Province region can be divided into two types: a thicker crust (35-41km) observed in the high-standing topography of the south of Borborema Plateau; and a thinner crust (29-34km) observed in the low-standing topography of the province. The thickness of the crust is overall well correlated to the topography, except for the north of the Borborema Plateau which is a highly elevated region and the models display consistently thin crustal thickness, similar to what was reported for depression areas. Some authors interpret that the depression areas and the north region of the plateau have experienced a strong stretching during the Mesozoic, while the stronger rheological south region has not. The present high elevation of north is then related to an uplift that might have occurred during the Cenozoic.

The Borborema Province of NE Brazil can be regarded as the remnant of a larger Proterozoic mobile belt that structured during the Brasiliano-Pan African orogeny at the end of the Neoproterozoic. The Province is scarred by a number of aborted rift basins resulting from extensional stresses related to the opening of the Atlantic ocean. After continental breakup, the Province was affected by episodes of intraplate volcanism and uplift, as expressed by the Macau-Queimadas magmatic alignment (93-7 Ma) and the high-standing Borborema Plateau (~1000 m). A number of models have been proposed to explain this intraplate activity, which invoke mantle plumes, small-scale convection cells, lateral crustal flow, and/or anomalous bodies in the lithospheric mantle. With the aim at discriminating among these competing models, the deep structure of the Province was investigated through analysis of seismic waves passively recorded at permanent and temporary seismic stations. At crustal levels, joint receiver function and surface-wave dispersion analysis revealed a 4-5 km thinning of the crust surrounding the southern Plateau, from 36-38 km to 30-32 km, along with the presence of a marked intra-crustal discontinuity accompanying the thin crust. Interestingly, the analysis also revealed the northern Plateau is a region of elevated thin crust. At upper mantle levels, SKS-splitting showed the mantle is surprisingly anisotropic at the heart of the Province, and body-wave tomography demonstrated the upper mantle under the northern half of the Province is markedly slower than that under the southern half. We propose the topographic variations are mostly the result of differential stretching during continental breakup - with Cenozoic uplift being restricted to the northern Plateau - while Cenozoic volcanism is likely to have resulted from lithospheric mantle sources. The lack of anisotropy in the mantle is harder to explain, and might have resulted from two layers with orthogonally oriented fast axes. 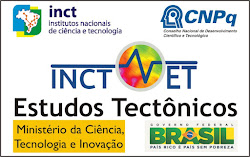